This past week was one of the busiest times I can remember at Triad Stage. As DEATHTRAP was finishing up its run on the MainStage here in Greensboro, and BEAUTIFUL STAR was well into its first week of rehearsal, A CHRISTMAS CAROL started rehearsals last Tuesday. Three casts and three plays stretched our housing and rehearsal space far more than usual. Our halls were filled with children, shepherds, Victorian misers and a murderer or two. And, suddenly, Christmas music filled the air, even as there were still screams drifting up from the theater downstairs.

We usually rehearse one play at a time or, more recently, one here and one in Winston-Salem. Both BEAUTIFUL STAR and A CHRISTMAS CAROL are big shows and we haven’t yet found a space in Winston Salem large enough for so many actors so I’ve handed over our third floor rehearsal hall to Bryan Conger and Ebenezer Scrooge. Rev. Roy Ledbetter and the members of his congregation and I have taken up residence, thanks to the generosity of our good friends at Lincoln Financial Group, in the former Bank of America on the corner of Elm and Friendly. 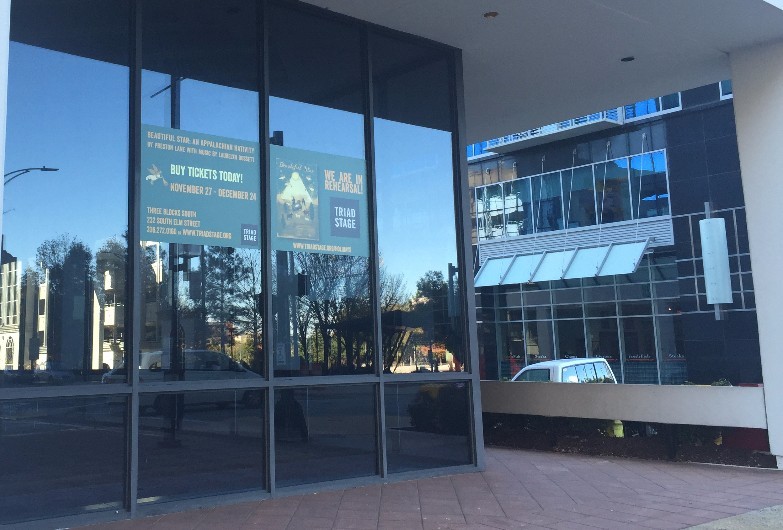 If you’ve ever walked down our third floor hallway at Triad Stage, you’ve passed the rehearsal hall. You probably didn’t know what it is. Like most rehearsal halls, it is secreted behind closed doors. So many don’t have windows. Ours, while perched on the top floor of our building, feels very much as if it is buried in some subterranean basement. The only light is from fluorescents, there are big bulky doors between the rehearsal and the real world, and unless it rains—in which case leaks spring in the most inconvenient places—the outside world seems inconceivably distant.

But this is not so on the first floor at the corner of Elm and Friendly. Two huge walls are all windows. From where I sit directing, I can see the ebb and flow of downtown and have an excellent view of Center City Park. And since I can see out, everyone else can see in. It’s a strange feeling to do something we theater folk normally do hidden behind walls and closed doors so absolutely in full public view.

At first, I worried about the cast and myself feeling self-conscious. Would we be able to take all the risks and make all the mistakes that are essential to the process of discovering the truth of a play? Would we be constantly checking over our shoulders to see who was watching and if they were judging us? Many of us in the theater are especially shy. The act of playing another is the distance we need to feel safe when encountering other people. I’ve battled shyness all my life. I’m definitely an introvert. Large crowds terrify me. I hate big parties, conventions, and conferences. I’m not very good at small talk. I battle this because I know it makes me seem aloof to some when in actuality I’m just plain ol’ terrified. But on stage, the fear isn’t an issue. At home writing a play, the fear isn’t an issue. And in the safety of an enclosed rehearsal hall, the fear isn’t an issue.

Surprisingly, we’ve adapted quite well to our new work environment. Occasionally a fender bender at rush hour will stop the work, but for the most part we just dance (and act and sing—and I turned a cartwheel once to prove to the kids I could) as if no one is watching. I hope there’s something of value for both the watcher and the watched about the fact we’ve opened the windows on how we work if anyone cares to see. All of us in rehearsal are downtown workers doing a job, playing a role in the economy and the life of our community. We make what we make handmade here for you. And for a few weeks our studio is fully visible.

I love the idea of our process being a fully visible part of downtown because I am so proud of playing a leading role in revitalizing our community. My view out the windows in the new rehearsal space and my walk down Elm Street reveals an exciting city center bustling with business 9 to 5, and coming to life with restaurant, arts, and entertainment patrons in the evening. It’s a far cry from the Greensboro I remember before Triad Stage opened our doors back in 2002. It’s a real treat to get to show so publicly the way we make the work that in its completed form has brought so many ticket buyers to Elm Street to shop, eat, and explore before a Triad Stage performance.

I can sometimes get too precious about protecting the secrecy of our process. I like that we’re letting Greensboro peek into something we’ve never really had the courage to show. And I hope if you do stop by and watch a bit, you’ll find it at least as interesting as the two northern women who once stood in front of me at Krispy Kreme watching the doughnut making process. One said to the other: “See, I told you they are healthy. Look, they’re boiled.”

And if you stop by for a look, please check out Urban Grinders, the great new coffee shop/art gallery just across Elm. The cold brew is fantastic and the space is great.